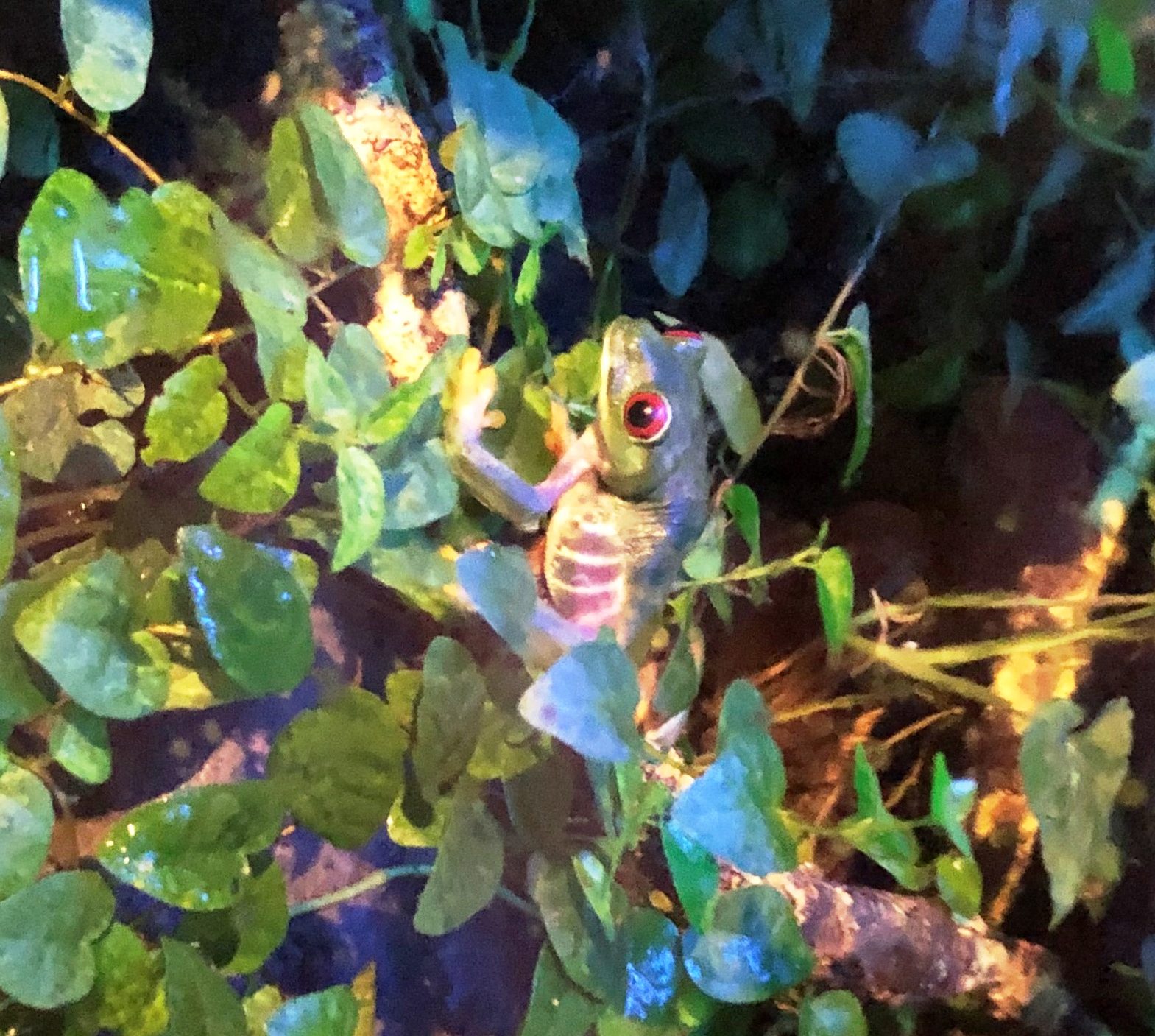 April 22, 2020, is the 50th anniversary of Earth Day. Since 1970, Earth Day has increased awareness of the planet we share with a wonderfully diverse population of living organisms. Earth Day helps encourage people to protect the Earth and to learn more about preventing pollution and climate change, and help preserve endangered species and our ecological health. As one way to celebrate Earth Day, we want to share information about one of our favorite critters: frogs. Please also visit our Virtual Earth Day Festival for a more activities and ideas about celebrating the home we share.

Frogs are the largest group of living amphibians. Modern frogs have been living on the planet relatively unchanged since the time of the dinosaurs, which is about 190 million years. Living amphibians are a class of cold blooded, vertebrate animals comprised of three orders: (1) frogs and toads (Anura), (2) salamanders (Caudata), and (3) caecilians (Gymnophiona). The name for frogs, Anura, is derived from Greek and translates to “without tail,” which is one of the characteristics of frogs that separates them from other amphibians. 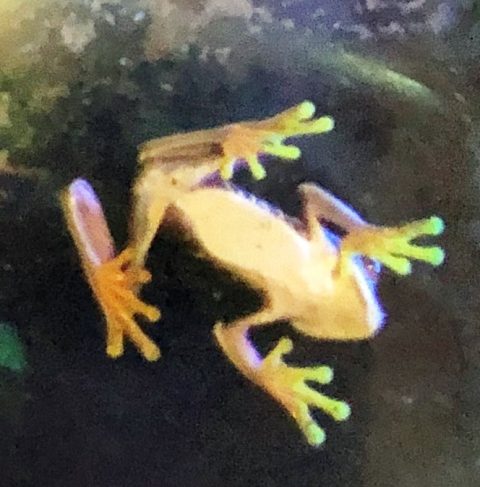 This frog viewed from below shows off its four strong legs and splayed feet.

Frogs have four limbs, lungs, permeable skin through which they can breathe, and no tail or neck. The body of a frog is built for jumping, although some frogs burrow, hop, walk, or swim. Some can even fly through the air. For instance, Chinese gliding frogs (Rhacophorus dennysi) can launch themselves into the air, spread webbing between their toes, and glide to a controlled landing. Frogs have vocal cords and their calls can be loud and frequent, especially at night when they are most active. Communication helps frogs find mates and establish territories. 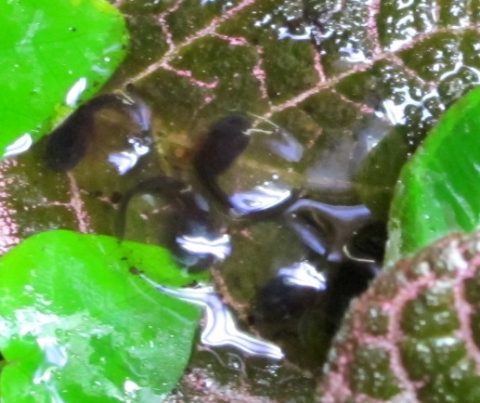 These tadpoles will eventually grow into frogs.

vegetation like leaves. Some frogs will even carry eggs or tadpoles on their backs or hold them within their bodies until a small adult frog emerges. The gelatinous eggs of amphibians lack a protective membrane and are dependent on water for development. The class name Amphibia is derived from Greek and means “living double life.” The double life refers to the metamorphosis of an aquatic, larval form into a different terrestrial, adult form—from limbless tadpole to four-legged frog.

The larval stage of frogs is called a tadpole. Tadpoles are very similar to fish in having gills and a lateral line, however, many tadpoles also have lungs. In addition to having gills, tadpoles can breathe through their skin allowing them to live in small pockets of water. Most tadpoles are vegetarians, although some can be carnivorous, like those of the ornate horned frog (Ceratophrys ornata).

Some frogs are able to secrete toxins through their skin as a defense against predators. The golden poison dart frog (Phyllobates terribilis) is the most toxic frog on the planet. Medical researchers are studying poison dart frog skin excretions, which have natural antimicrobial properties, in hope of developing helpful new drugs. A chemical known by researchers as epibatidine, found in the skin of the phantasmal poison frog (Epipedobates tricolor ), has been used to develop a potential pain killer 200 times more effective than morphine. 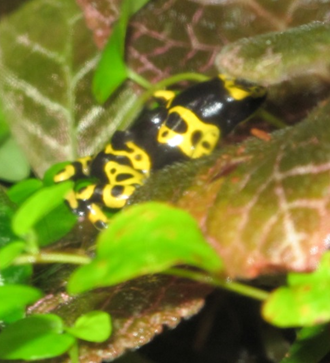 A dart frog among green leaves.

Frogs are important to the health of many diverse ecosystems. All frogs are predators and many consume vast quantity of insects. Controlling insect populations is important because insects can sometimes harbor zoonotic diseases and many insects eat and do damage to agricultural plants. In turn, frogs are an important part of food webs as a food source for predators such as fish, reptiles, birds, and mammals.

Frogs are known as “indicator species” as their condition and population help reveal environmental health or degradation. Pollution, for instance, very quickly affects frogs’ permeable skin. Today, frogs are faced with many survival challenges and some are quickly going extinct due to pollution, loss of habitat, illegal collection, and diseases such as chytrid fungus.

Dan Augustino is the Springfield Museums Aquarist. He is responsible for the safety, health, and comfort of our live animals here at the Museums.

Do Try This At Home! The Magician’s Table