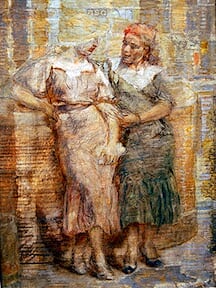 Rather than creating stereotypical or sexualized images as some of her male contemporaries did, Bishop produced beautiful representations of real women going about their daily lives.

Isabel Bishop (American, 1902-1988) is best remembered for her perceptive drawings, prints and paintings of women who entered the workforce in the decades following WWI. As scholars have noted, Bishop’s depictions of young women who walked around, lunched near, or paused for conversation in New York City’s Union Square were progressive in their naturalism. Rather than creating stereotypical or sexualized images as some of her male contemporaries did, Bishop produced beautiful representations of real women going about their daily lives. Equally significant, but less frequently discussed, is the artist’s progressive painting technique. In creating her paintings, Bishop made the unusual choice to cast off the “finished” look promoted by her art education. Instead, she foregrounded the unfinished aesthetic of drawing, a medium that, like the working women Bishop depicted, was often cast aside by the history of art.

As visitors to the exhibition Isabel Bishop’s Working Women: Defying Convention will notice, Isabel Bishop’s paintings are atmospheric, with fluid color palettes that capture the transience of city life. In order to delineate figures from their hazy backgrounds, Bishop employed drawn lines, sketched or incised on top of oil or tempera paint. In the D’Amour Museum of Fine Arts’ masterpiece, At the Noon Hour (Figure 1), certain elements of the women’s bodies are boldly 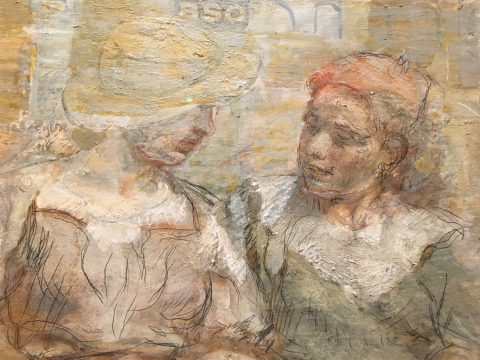 outlined while other elements of nearly fade into the background. In At the Noon Hour, the facial features of the woman on the right benefit from linear contouring, but the yellow hat of the woman on the left almost blends into yellow and green tones behind her. In this tenuous figure-ground relationship, the drawn line holds the image together. Although working in a figural tradition with deep roots in western art, Bishop’s paintings are simultaneously new and old: imbued with hints of naturalism, yet capturing modern individuals in an inventive style.

Isabel Bishop’s decision to combine tradition and innovation was shaped by an embrace of some aspects of her artistic training and a staunch rejection of others. After enrolling in the Art Students League in 1920, Bishop studied with Kenneth Hayes Miller (American, 1876-1952), an artist and professor who was invested in applying Renaissance and Baroque drawing and painting techniques to modern subjects. In his teaching, Miller adhered to many traditions that were established by European academies in the 16th through the 19th century. These academies, historically, excluded women – even in 1893, women studying at the Royal Academy were not allowed to draw from nude models – and established a regimented way of learning to make art: before students were allowed to practice the high art of painting, they were required to master the basics of drawing. In a finished painting, fresco or mural, drawings were intended to be covered by paint in order to create modeling and depth. Bishop, of course, revised this order. However, the fact that Bishop engaged in creating numerous preparatory drawings before adapting them to an etching plate, then using them as the basis for a painting, is evidence of her interest in some elements of the traditional process, as taught by Miller. Bishop’s involved method of preparing canvas or board was also inspired by the 17th century work of Peter Paul Rubens (Flemish, 1577-1640), which she read about in Max Doerner’s book Materials of the Artist.[1] Many of the artist’s paintings are completed on masonite, which she covered with up to eight coats of gesso before layering with a ground of horizontal stripes of powdered charcoal and white lead, to create a transparent surface. The painting itself was composed of an underpainting and topped by a nearly transparent oil layer. In some instances, Bishop layered additional tones or vertical and horizontal lines to create textural grids.

Even though Isabel Bishop’s laborious method (it often took her months to create a single painting) is indebted to an academic process, the fluid figure-ground relationship that she achieves in her mature paintings is not. Although she learned the skills necessary to do so, Bishop refused to create a sense of depth beyond the limited amount of space that her figures, themselves, occupy. She was not interested in backgrounds that appeared to recede into space with great clarity. In fact, Bishop later cast off this ultra-illusionistic quality and what she deemed “finished, finished things.” In a later commentary on her early work completed under Miller’s direction, she stated, “I slashed them! Why they were terrible […] I worked on these things and I worked on them, and they were finished, finished things. They were completely off track.”[2] This fascinating statement clarifies Bishop’s preference for works that are unfinished, a descriptive term that is applied to drawing far more often than painting. Additionally, Bishop embraced an even more liberated approach to the overdrawing and layering than her Dutch and Flemish predecessors. Rather than drawing on already established contours so as not to disrupt the illusionism of the scene, Bishop was unafraid to engage in overdrawing that is sketchy, uneven, and not restricted to contours, colors and planes (Figure 2). Even in instances where Bishop did 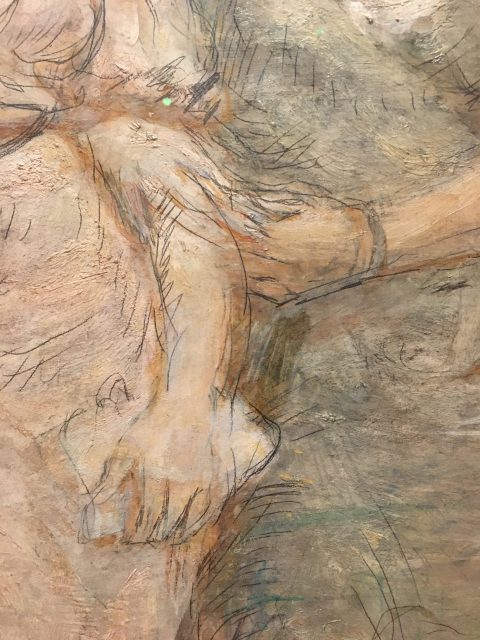 paint over her sketched lines, they’re frequently visible behind a thin veil of paint. With their amber or yellow tones and unconventional use of line, Bishop’s paintings look more like the sketches and underpaintings of Flemish masters than their finished works.

As we have seen, Bishop did not only elevate the status of women through her work, she also brought the subsidiary medium of drawing to the forefront in her paintings. Although Bishop did use drawing in a preparatory fashion, she also applied drawing to the painted surface, thereby re-ordering and remixing the method of creating art that was proscribed in the European, and later American, art classes. As in Bishop’s painting At the Noon Hour, the atmospheric depiction of Bishop’s painted figures is achieved through a layering of drawing and painting that subverts traditional media hierarchies. Truly, the modernity of Isabel Bishop’s paintings lies not only in her ability to depict contemporary women in authentic moments, but is also literally grounded in her preference for the unfinished and the momentary aesthetic of drawing.

Figure 1: Isabel Bishop, At the Noon Hour, circa 1935-36, tempera and graphite on composition board: 25 x 18 in. Michelle and Donald D’Amour Museum of Fine Arts, Springfield Museums, Springfield, Massachusetts, 39.01.

Figure 2: Detail of Isabel Bishop, At the Noon Hour, circa 1935-36, tempera and graphite on composition board: 25 x 18 in. Michelle and Donald D’Amour Museum of Fine Arts, Springfield Museums, Springfield, Massachusetts, 39.01.

Nochlin, Linda. “Why Have There Been No Great Women Artists?” In Women, Art, and Power edited by Linda Nochlin. New York: Harper and Row, 1988.

This blog post is adapted from the essay “The Seamless Web: Drawing and Gender in the work of Isabel Bishop,” By Maggie North.

North is Acting Curator of Art for the Springfield Museums.

Congratulations to the Winners of Our 2016 Gingerbread Competition!