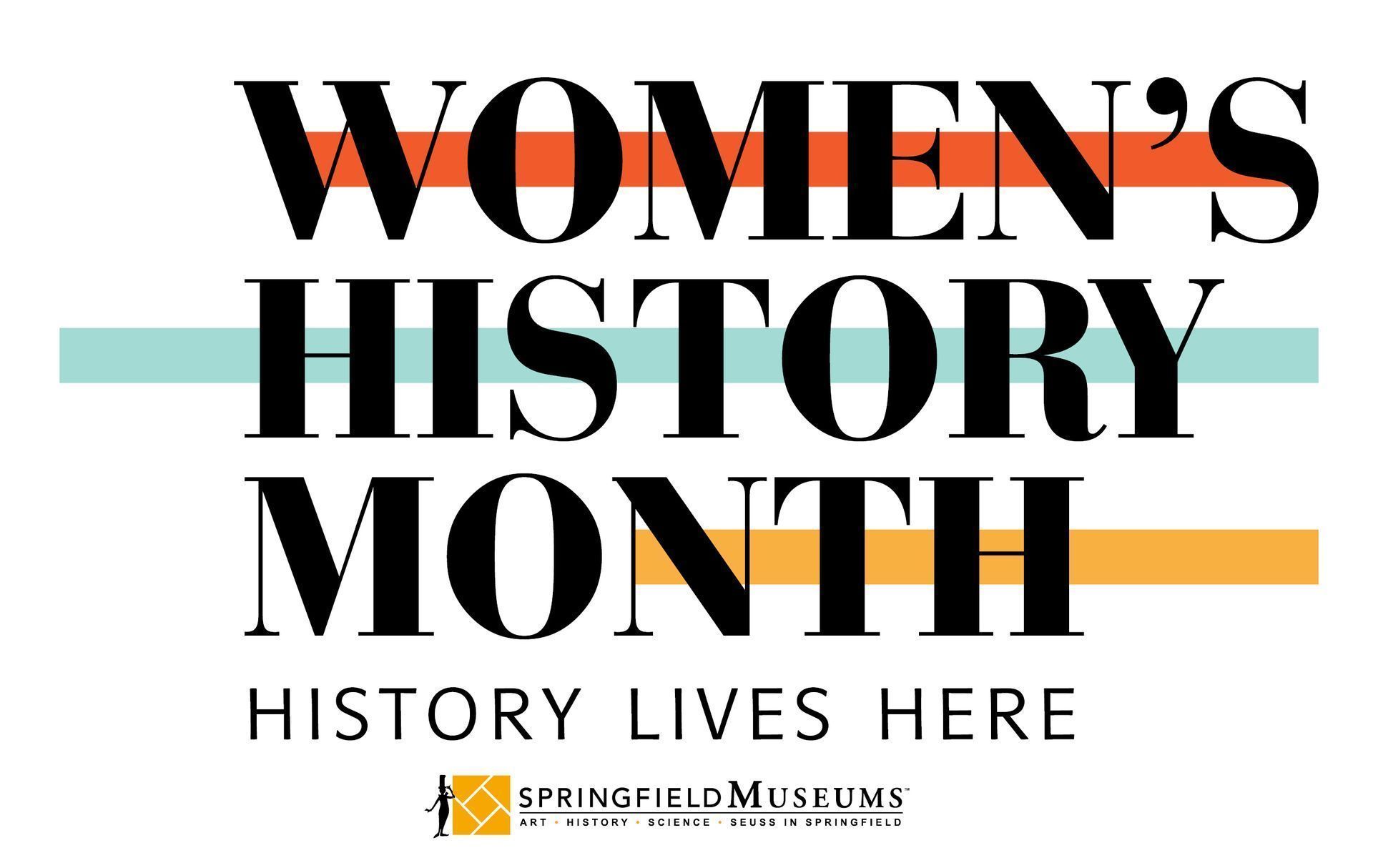 The Springfield Museums celebrate Women’s History Month by highlighting women of the past, and present who are shaping the future!

Women’s History Month is celebrated throughout the month of March. The Museums highlighted woman artists across social media platforms, and shared artwork by and about women in the weekly column in the Springfield Republican, Treasures at the Springfield Museums.

In 1942, the D’Amour Museum of Fine Arts announced a competition for the creation of a mural to be displayed in the galleries.  The winner, Sante Graziani (1920-2005), designed a wall painting that celebrated the arts in Springfield and included depictions of dance, music, theater, painting, sculpture, architecture, and photography.  Music is represented by five youths singing and playing instruments, as well as by a figure modeled after Springfield resident Adele Addison, holding a violin and shown prominently in the foreground.  Addison represented not only the art of singing, but the creative contributions of the Black community to the vibrant art scene in Springfield. She went on to national acclaim as an opera singer.

The mural is on display in the D’Amour Museum of Fine Arts Early Twentieth Century American Gallery.

American sculptor Anna Hyatt Huntington (1876-1973) was among New York City’s most prominent sculptors and rose to success as an animal sculptor. She loved animals and portrayed them in active, dramatic poses, as shown here in Goats Fighting (1905).

Huntington always worked directly from life and may have modeled these goats after animals found at a favorite destination, the Bronx Zoo. Later in life, Huntington established a zoo and working farm that included stables and kennels on her various country estates. In 1931, her 9,000 acre sculpture garden and nature preserve, Brookgreen Gardens in South Carolina was incorporated as a not-for-profit corporation that can still be visited today.

Goats Fighting is on view in the Early 20th Century American Art Gallery in the D’Amour Museum of Fine Arts.

During the 1930s, documentary photographer Dorothea Lange (1895-1965) was hired by the Resettlement Administration, later the Farm Security Administration, to capture the hardships of American life during the Great Depression. Published in newspapers and magazines of the time, Lange’s powerful photographs of individuals and families aimed to generate empathy and effect social change. Included in Lange’s body of work are photographs that document the lives of African Americans living in the southern United States, as well as the adversity they faced.

Ex-Slave with a Long Memory Alabama (1937) captures an elderly woman whose lifetime straddled two eras. Although the identity of the woman pictured is unknown to art historians, Lange’s photograph and title suggest an individual who has endured injustice with strength and dignity.

Today, Lange is considered a key figure in the development of documentary photography and is remembered for powerful artworks that humanized the consequences of the Great Depression.

Discussing this lithograph, Marisol Escobar (1930-2016) stated, “I chose to portray Lucretia Mott and Elizabeth Cady Stanton because of their leadership in the struggle for women’s rights, and because I like their faces–strong, determined, with very intense eyes.”  Mott and Stanton were two of the five women who organized the Seneca Falls Convention, the first women’s rights convention in the United States, held in July of 1848.

Artist Marisol Escobar, best known as Marisol, was born in Paris to wealthy Venezuelan parents. Although she studied art at the Beaux-Arts in Paris, the Art Students League in New York, and with influential abstract painter Hans Hofmann (1880-1966), she charted a distinct and self-directed path through the art world. Marisol rose to prominence while creating wooden figural sculptures the 1960s, and continued her artistic journey by making portraits of artists and political figures in the 1970s.

Women’s Equality was created as part of a larger portfolio titled Spirit of Independence. Commissioned for the nation’s bicentennial, the portfolio included works by twelve important American artists who incorporated ideas about nationality and independence into their artwork.

We invite you to explore Women’s History Month for more!

Video – The Power of Women: The Republican Heritage Book Series