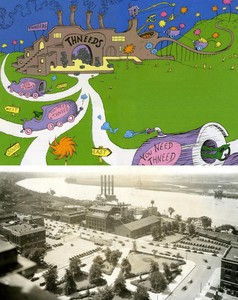 And to Think that He Saw It in Springfield!

The influence of Springfield on the world famous children’s book author known as Dr. Seuss is explained in And to Think that He Saw It in Springfield, a new exhibit at the Lyman and Merrie Wood Museum of Springfield History at the Quadrangle.

Theodor Seuss Geisel was born in Springfield on March 2, 1904, in his family’s home on Howard Street. The Geisels moved to 74 Fairfield Street in the Forest Park neighborhood when Ted was two years old, and it was there that he grew up.

Although Ted Geisel left home after he graduated from Dartmouth in 1925, the familiar buildings, people and landscapes from his childhood in Springfield appear again and again in his books. The exhibition includes many remarkable comparisons of his fanciful illustrations with actual photographs of places and things in Springfield that he would have known.

The title of his first published children’s book, And to Think That I Saw It on Mulberry Street, refers to an actual street in Springfield that Ted Geisel would have walked past on his way to high school.

The huge old building with four belching smokestacks that was the Springfield Gasworks appears as the Thneeds factory in The Lorax. The crenellated towers of the castle-like Howard Street Armory in Springfield appear in The 500 Hats of Bartholomew Cubbins.

The strange-looking vehicle driven by Sylvester McMonkey McBean in The Sneetches looks very much like a huge tractor built in Springfield by the Knox Automobile Company. The winding paths that once weaved their way through Springfield’s Forest Park, where Ted Geisel’s father was park superintendent, appear in Horton Hears a Who!.

Incidents that made strong impressions on the young Geisel also surface in his books. Growing up as a German-American during World War I, a time when there was widespread animosity directed at people of German origin, made Ted feel like an outsider in his own hometown. He makes references to this prejudice in The Sneetches, a story about creatures who thought they were better than others because they had stars on their bellies.

Even the names of families who lived in Springfield when Geisel was a boy appear in his books. For example, the name McElligot appears in the title of McElligot’s Pool.