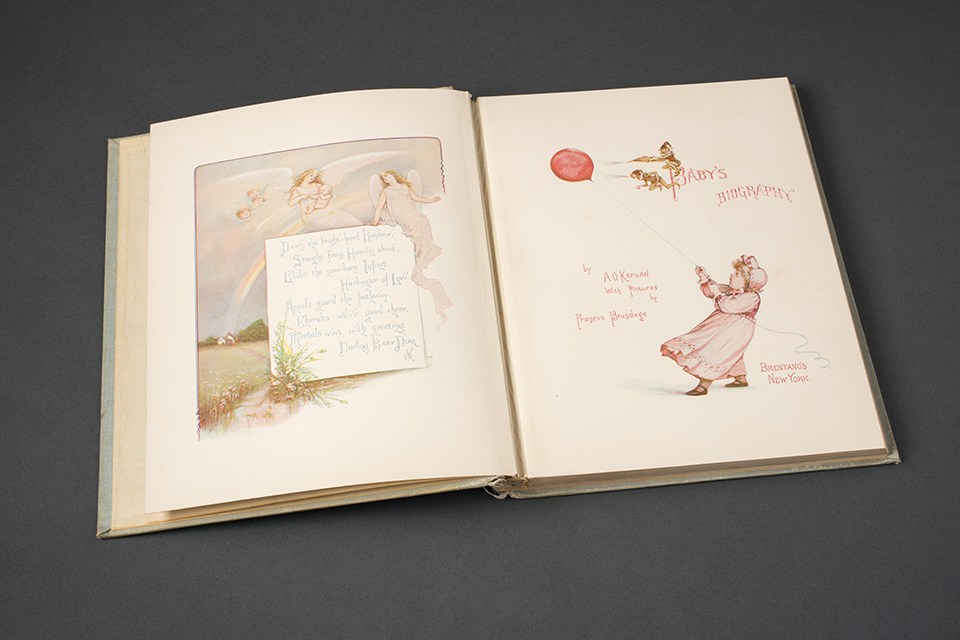 The stepdaughters told the Museums they found something absolutely remarkable, something enormously important to Springfield, something that would speak to Ted’s deep roots in his hometown, the closeness of his family, and the strength generated from being much cherished.

It wasn’t until Ted Geisel’s step-daughter, Lark Grey Dimond-Cates, placed the package into Springfield Museums President Kay Simpson’s hands that Kay had any idea of what this great discovery was—and it wasn’t until Kay started to turn the pages that she grasped the priceless gift Lark and her sister Leagrey Dimond had given to everyone who loves Dr. Seuss.

The found treasure is Theodor Seuss Geisel’s baby book—not a book Dr. Seuss wrote about babies, but the kind of book parents, primarily mothers, keep to record the miraculous growth of their children. “This book is a true testament to Motherlove,” Dimond said.

Dimond-Cates elaborated: “Once upon a time right here in Springfield, a young women gave birth to a little boy. Being a proud parent, she recorded his birth in what is known as a baby book and for the next eighteen years she faithfully put into this book all of her son’s achievements. That little boy grew up to be Dr. Seuss.”

Many baby books are half filled in, abandoned soon after they are begun, but not this one. Henrietta “Nettie” Seuss Geisel, Dr. Seuss’s mom, kept his baby book with meticulous care.

“I can’t even begin to describe what it is like to look in this book,” Kay Simpson said. “I don’t know if the page that shows the increasingly artistic swirls and curlicues of Ted’s signature over time or the last page on which Nettie records how Ted felt about music lessons among other observations is my favorite.”

Dimond speaks with passion about how this book underscores Ted’s connection with Springfield. “People from Springfield might recognize their own names in its pages,” she said. This book speaks to what it means to grow up in a town, surrounded by people who care, she said.

The book, titled “The Baby’s Biography,” is a volume that was mass produced at the turn of the century and cost about $3, which was quite a lot of money for the time it was purchased. The artwork is plentiful and sweet, by the prolific illustrator Frances Brundage (1854-1937), who supported her family after her father’s death by drawing and painting pictures, mostly of adorable children and babies, which were often printed as postcards.

Never before displayed, The Baby’s Biography: Theodor Seuss Geisel will be unveiled May 9th, at the Amazing World of Dr. Seuss Museum, launched by a press conference with words from guest speakers including Leagrey Dimond.

The Amazing World of Dr. Seuss is the first and only museum dedicated to Springfield native, Theodor Seuss Geisel. The book will be displayed on the second floor of the museum in a sealed case to protect its fragile paper pages, while images of book pages will be projected on the gallery wall. Visitors will learn about Ted’s first steps, first tooth, first word—most importantly they will get a glimpse into the family life of the boy who would become the man who made reading fun.

Nettie was, by all accounts, a remarkable mother, who sang rhyming songs to her children and, instead of scolding young Ted when he drew on his wall, praised and encouraged his talent. Ted Geisel said of his mother that her warmth and playfulness cast a glow over his childhood. Dimond-Cates can see this love when she turns the pages of the baby book: “[Nettie] did this out of love for her son. It’s what moms do.”

As a girl, Nettie Seuss had hoped to attend college. However, her father needed her help in the family bakery, so she did not leave for school. She married Theodor R. Geisel, the brewer’s son, and together they nurtured a loving family. Ted Geisel stated that it was his mother who was responsible for, “the rhythms in which I write and the urgency with which I do it.” The rhythm of Dr. Seuss’s stories, along with their rhyming, suspense, humor, and whimsical illustration all added up to the books that revolutionized reading. And, it all started with a mom who adored her children.

“So if you have a newly arrived son or daughter,” Dimond-Cates said, “start a baby book. Keep it faithfully and—even if they don’t grow up to be someone famous—they will know when they look at that book that they were loved and there’s nothing more important than that.”