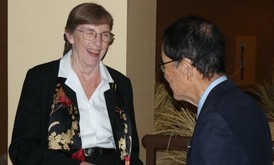 On Friday, November 8, the Springfield Museums will host a delegation from the Japanese Consulate that will award local resident Sue Root the Order of the Rising Sun, Gold and Silver Rays from the Japanese government.

The order is awarded to those who have made distinguished achievements in international relations, promotion of Japanese culture, advancements in their field, development in social/occupational welfare or preservation of the environment. It is awarded in the name of the emperor.

Ms. Root is a Holyoke resident and the former executive director of the World Affairs Council of Western Massachusetts. She is being honored for her efforts in establishing relations between Western Massachusetts and Hokkaido, the island north of the main island of Japan.

The Springfield Museums were chosen to host the ceremony because of their world-renowned collections of Japanese woodblock prints, arms and armor, and decorative arts, as well as their ongoing relationship with major cultural institutions in Japan.

The private ceremony will take place at the George Walter Vincent Smith Art Museum at 5 pm. Media inquiries should be directed to the Consulate General of Japan, Boston office, at 617.973.9772.