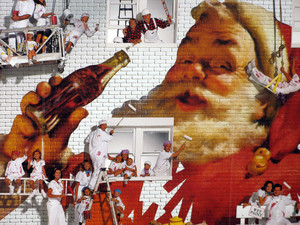 Next week, the Michele and Donald D’Amour Museum of Fine Arts will unveil two exhibits to help usher in the holiday season. A Peek Inside Santa’s Sack: Vintage Cast Iron Toys and Season’s Greetings: Photographer’s Holiday Cards both open on November 12, 2013 and run through January 5, 2014. MassMutual is the 2013 Premier Sponsor of the Springfield Museums.

A Peek inside Santa’s Sack: Vintage Cast Iron Toys features highly collectable, vintage cast iron toys including fire trucks, horse-drawn carriages and  emergency vehicles, airplanes, toy trains and miniature wood and coal stoves. Cast-iron was a common toy material from the 1870s until World War II, one ideally suited for mass-production since the molds could be used thousands of times over. Some of the most popular cast iron toys were made by three toy-makers: Kenton, Hubley and Arcade Manufacturing Companies, all of which are represented in the exhibit. These unique playthings continue to be popular among antique collectors to the present day.

The second exhibition, Season’s Greetings: Photographer’s Holiday Cards, features an extraordinary collection of contemporary works that capture the essence of the season. The exhibit was organized before digital and cellphone cameras became popular, and as a result, none of the photographs have been digitally altered.  The images were produced by professionals and amateurs from the United States and Canada, and celebrate the holidays of Christmas, Hanukkah, Kwanzaa and New Year’s. Traditional religious and sacred themes are explored as well as contemporary and humorous subjects.  The custom of exchanging greeting cards dates back to the 1840s in England and to 1875 in America, and the tradition has since become the most popular form of social communication during the holidays.