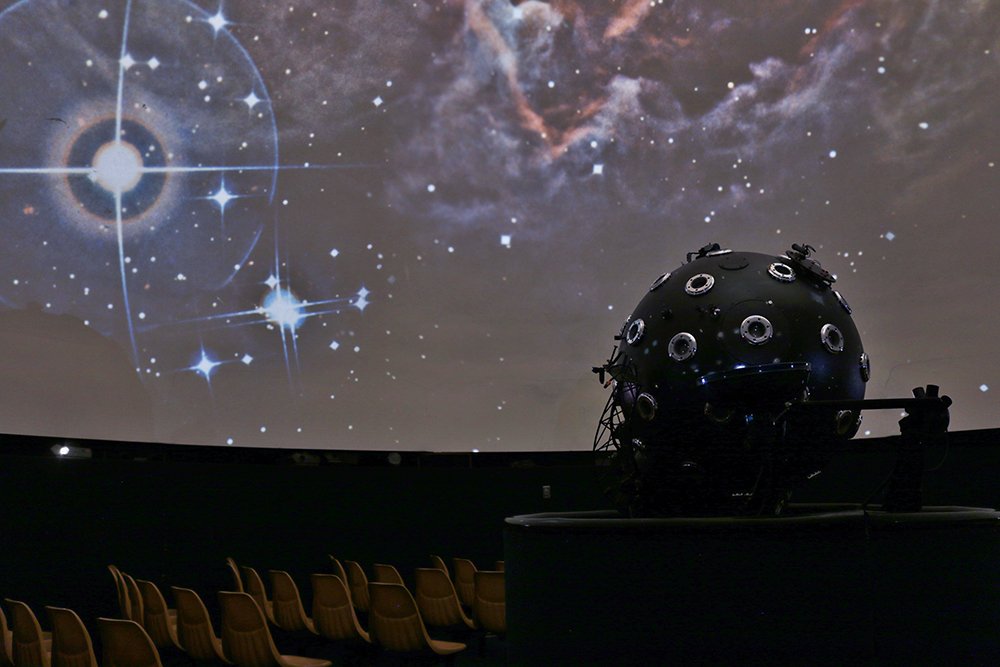 Schedule to be determined
Planetarium tickets are free for Springfield Museums members.
Nonmember tickets are $3 for adults and $2 for ages 17 and under, in addition to museum admission.
Please note, due to the ongoing pandemic, and children under 12 not yet having access to vaccination, all will be required to wear masks in the planetarium.

After 18 months of planning and hard work—and interruptions due to the pandemic—the Springfield Museums present the newly refurbished Seymour Planetarium Friday, July 16, at the Springfield Science Museum.

Freshly painted with new carpets and new theater-style, cushioned seats, the planetarium looks bright and shiny. But even brighter and more shiny is the Korkosz starball in the center of the round and domed room.

“Although most visitors will not be looking at the furniture when they have the heavens presented above them, they will probably be a lot more comfortable in our new seating,” said Springfield Science Museum Director Mike Kerr. “The starball, however, might catch their full attention before the lights go out. It will no longer be hidden behind a solid barrier, but instead is available for all to see behind a protective, but open-work fence.”

All did not go smoothly though in the final weeks of the preparation to re-open. Kerr, together with Planetarium Manager and STEM Educator Kevin Kopchynski, suffered a minor setback while testing the star of the show, the historic Korkosz projector. The machine built by the Chicopee-based Kokosz brothers in 1937 suddenly stopped moving (accompanied by some unusual and unexpected sounds). Fearing the worse, they opened the belly of the machine and peered in. It turned out that a few (probably equally historic) belts had frayed and finally given up, snapping but causing no damage to the machinery. Kerr, Kopchynski, and Science Museum volunteer Chris Mastroianni engaged in some serious ingenuity and problem solving to find the necessary replacement belts, install them, and try again.

“After a little tweaking,” Kerr said, with delight, “the starball was running as smooth as ever—even better, in fact, because in the process  we regained a range of motion that had been disabled for years.” These motions, Kerr said, were aspects designed specifically to educate viewers about the movement of the night sky. “We turned off the room lights, brought up the starlight, and watched the night sky turn overhead.  It was exciting!” he said.

The historic Korkosz projector’s breathtaking view of the night sky will continue to be a major feature of the re-opened planetarium’s programs. And the starball’s projections will be enhanced by digital presentations, providing planetarium guides even more tools to share the science, stories, and wonders of the night sky for all who seek to understand more about the heavens above us.

Kopchynski could not be happier about the re-opening: “We were excited to offer virtual astronomy experiences throughout the pandemic, many of which you can still access on our website, but it is truly wonderful to invite visitors back to our planetarium to experience the stories of the night sky together.”

This renovation is only one step in the ongoing process of evolution in the Science Museum, Kopchynski said. “There is a plethora of new programming that will be available once we can reliably stream to the planetarium,” he said, looking to future plans.

Repairs and refurbishment of the Seymour Planetarium were made possible from ongoing support by the Evolution campaign, a fundraiser to help the Science Museum refresh and update its presentations. “We are deeply grateful to all who have contributed to the Evolution campaign,” said Kerr, who continues to hone plans for a refreshed and innovative science center and hub of STEM learning for this region. All who might want to donate to the ongoing enhancement of the Science Museum can do so at https://springfieldmuseums.org/evolution/

Below, please see the planetarium shows that will be presented. Because the schedule sometimes changes, please check SpringfieldMuseums.org for the schedule on the day you visit. Please note, due to the ongoing pandemic, and children under 12 not yet having access to vaccination, all will be required to wear masks in the planetarium.

Join Jesse in a dream adventure sparked by a bedtime story about the night sky, digitally remastered for a video format with added special effects.  Through story and song, children explore the concept of day and night and discover that the sun is really a star. Recommended for ages 5 and up

Mystery of the Disappearing Dinosaurs

Dinosaurs ruled the Earth for nearly 200 million years and then, in the geological blink of an eye, they were gone forever. How did creatures that big suddenly vanish from the face of the Earth? Travel far out into space, deep inside the earth and back in time as we try to unravel the mystery of the disappearing dinosaurs. The show is digitally remastered for a video format with new effects added. Recommended for ages 8 and up.

Splendors of the Summer/Fall/Winter/Spring Sky

What is that you’re seeing in the sky at night? With the planetarium stars as the backdrop, find out how to locate and identify celestial objects, planets, and constellations as the seasons change. The seasonal changes in the sky are probably the first scientific observations made as people sought to anticipate the seasons and grow their food crops. As you observe these changes you participate in one of the fundamental cycles of nature. Recommended for ages 8 and up.

MORE ABOUT THE STARBALL

The Springfield Science Museum is home to the Seymour Planetarium, the oldest operating planetarium in the United States. Most notable inside the domed structure is the Korkosz starball, the world’s oldest operating American-made projector (1937), which projects the night sky allowing planetarium operators for decades to share the wonder of more than 7,000 stars with audiences of all ages.

Planetarium pioneers Frank and John Korkosz built the starball themselves. The brothers spent years overcoming challenges involving optics, complex gears, and the manufacture of the ball itself. There were only five other planetariums operating in the United States at the time, four of which used German-made Carl Zeiss projectors. Like the Zeiss projectors, the Korkosz starball was designed to display the constellations and their motions through the night.

The Korkosz starball’s effect was so realistic that it was used to train pilots from Westover Air Base in Chicopee during World War II in celestial navigation. And it is still used today to help familiarize viewers with the wonders of the night sky.