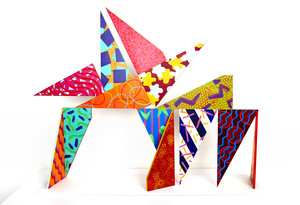 The artist, whose work combines complex geometry and painterly invention, is particularly fascinated by the kimono, the traditional dress of Japan and the obi, the wide sash that is worn as a belt with it.  She appreciates the “beauty and tenacity” expressed through the garments and notes that Japanese women continually recycle and layer fabrics to create unique looks and patterns. Garfinkel is also inspired by the color field artists of the mid-20th century who explored different optical effects by manipulating their canvases.  Garfinkel carefully arranges her forms in very specific ways to create a uniquely approachable and participatory aesthetic experience.

The exhibit will also serve to complement the extensive collection of Japanese decorative art from the 18th and 19th century on view on the 2nd floor of the Museum and masterpieces of Japanese arms and armor in the gallery at the south end of the building. The Springfield Museums will also be hosting a related exhibit, Above the Fold: New Expressions in Origami, beginning on January 20, 2015 at the Michele and Donald D’Amour Museum of Fine Arts.

Origami Interpretations: Gloria Garfinkel was organized through Katharine T. Carter & Associates. MassMutual is the 2014 Premier Sponsor of The Springfield Museums.