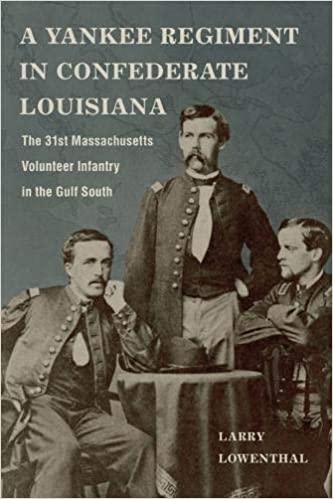 This contact led to the re-discovery of six boxes of diaries, letters, reminiscences, and photographs, most of which had been transcribed and typewritten, but never published.

The Lyman & Merrie Wood Museum of Springfield History has informally adopted a Civil War infantry regiment. The 31st Massachusetts Volunteer Infantry Regiment, originally known as the Western Bay State Regiment, was comprised mostly of soldiers from western Massachusetts, and was the first regiment to capture and enter New Orleans. Because the regiment spent the war in the western theater,  it has received far less attention and study from historians than its better known compatriots.

Larry Lowenthal is the author of A Yankee Regiment in Confederate Louisiana (LSU Press, 2019).

A new book on the 31st Mass seeks to remedy that.  A Yankee Regiment in Confederate Louisiana, authored by our late friend and colleague Larry Lowenthal, is a welcome addition to the vast body of literature on the Civil War.

The book spun out of a project initiated by the history museum back in 2014, when a Louisiana historian, who uses the moniker “Foxhole Frank,” contacted the archives in search of more information about the regiment. This contact led to the re-discovery of six boxes of diaries, letters, reminiscences, and photographs, most of which had been transcribed and typewritten, but never published. The articles in the box had been collected in the early 1900s by the regimental historian Lewis Frederick Rice, who died before the book could be completed. In 1929, the documents were donated by the dwindling regimental veterans’ association to the Connecticut Valley Historical Society, whose collection was absorbed by the Wood Museum of Springfield History. The collection, which includes more than fifty manuscripts written by more than thirty individuals, remained unprocessed until 2014.

With grant money from the Massachusetts Sesquicentennial Commission of the American Civil War, a website honoring the unit was created and most of the collection was scanned and uploaded. Local historian and author Larry Lowenthal was recruited to put the material in historical context. He was the perfect person for this effort, having worked for the National Park Service at several Civil War battlefield parks and possessing a deep interest in the history of western Massachusetts. Lowenthal took to the project like a duck to water and soon drafted an extensive history of the unit for the website.

His new book, derived largely from the research he performed for the web project, brilliantly brings this unit’s history to life for the general reader. It provides an enjoyable, fast-paced narrative, featuring the immediacy of many eye-witness accounts from local soldiers interwoven with the perspective and insight offered by 150 years of distance. The book completes the vision of Lewis Frederick Rice, the regimental historian.

The book was published in December 2019, shortly before Larry Lowenthal passed away in March of 2020. He has left a valuable legacy for people with an interest in western Massachusetts history and of the Civil War. A Yankee Regiment in Confederate Louisiana is available from LSU Press and can be ordered on AmazonSmile.

Cliff McCarthy is Archivist for the Springfield Museums Library and Archives.