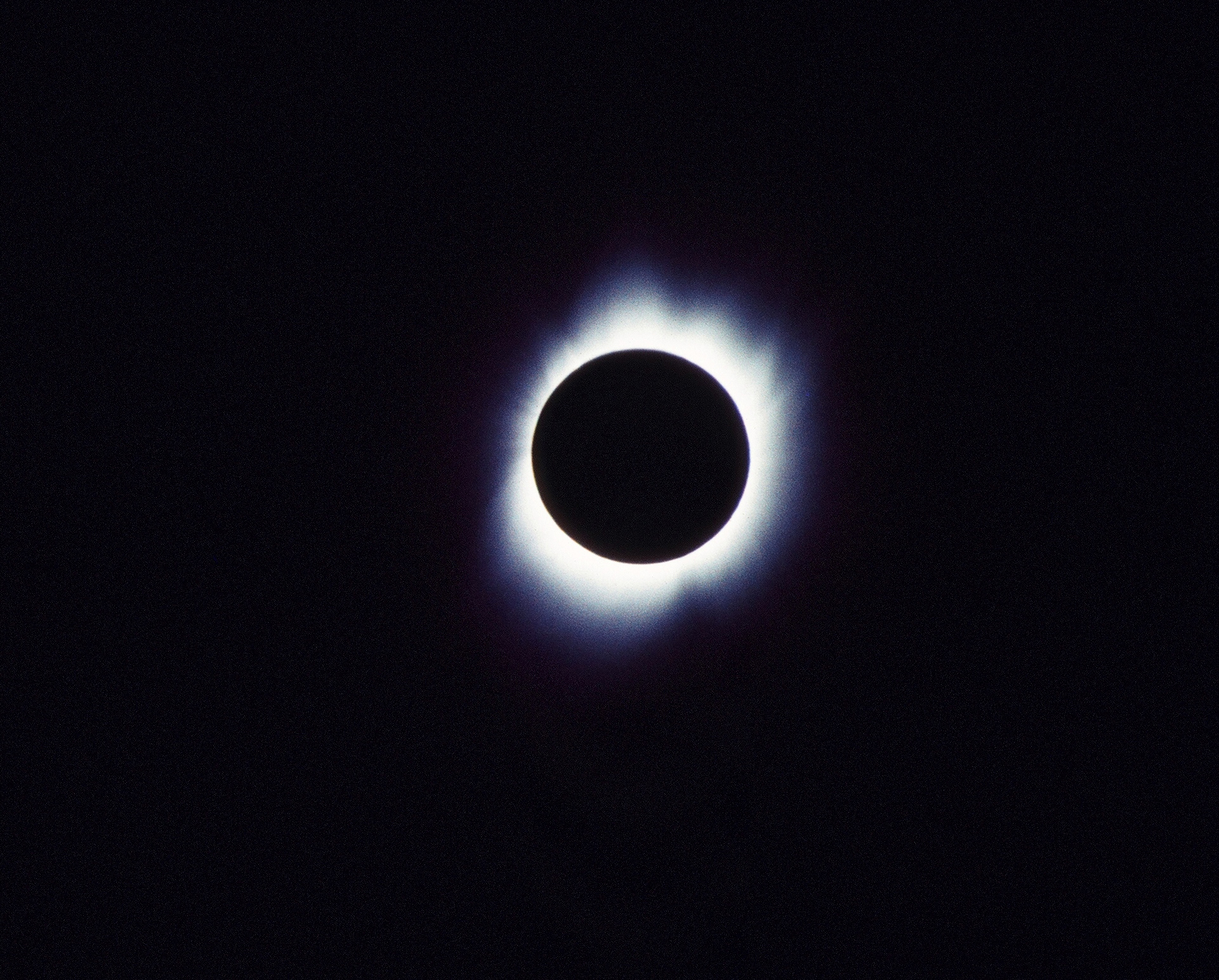 Richard Sanderson, Curator of Physical Science of the Springfield Science Museum, shares a personal experience of a solar eclipse.

What is it about a total solar eclipse that inspires people to travel to the far corners of the world, just to stand inside the moon’s shadow for a few fleeting minutes?  I discovered the answer to that question when I was a teenager 44 years ago.  Millions more will experience the stunning beauty of this cosmic spectacle later this month during the long-anticipated “Great American Eclipse.”

On August 21, the moon’s shadow will touch the continental United States for the first time since 1979, racing along a 70-mile-wide strip of real estate from Oregon to South Carolina.  While Massachusetts is well outside the path of the moon’s shadow, we will still have an opportunity to enjoy a partial solar eclipse as 2/3 of the sun is covered by the moon.

A total solar eclipse occurs during daytime when the moon passes directly between the earth and sun and casts its shadow onto our world.  Those lucky people who are located within the path of this moving shadow, called the path of totality, get to witness the moon creeping over the sun’s face for about an hour.  Then, for a few precious minutes known as totality, the sun totally disappears behind the moon as the lunar shadow sweeps past.

At the onset of totality, people within the shadow are plunged into an eerie darkness similar to late twilight.  The sudden appearance of several dozen stars sprinkled across the daytime sky seems nothing short of miraculous.  Throughout totality, the moon’s black silhouette is surrounded by a fuzzy crown of light—the solar corona—which is the sun’s tenuous atmosphere that extends beyond the limb of the moon and can only be seen in full splendor during a total eclipse.  All too soon the period of totality ends, the sky brightens, and a partial eclipse is visible once again as the moon gradually uncovers the sun.

As a young boy, I loved to listen to my dad’s stories about the total solar eclipse he saw from West Springfield when he was a child.  The date was January 24, 1925, and although we have seen partial solar eclipses in this area since then, the moon’s dark shadow won’t touch Springfield again until 2079!  Total eclipses of the sun occur every year or two so they aren’t all that rare, but the privilege of watching one from your own hometown is exceedingly rare because the shadow traces a relatively narrow path across the globe.  Some folks are lucky, like my dad was in 1925, but most people who want to see a total eclipse must travel in order to be inside the path of moon’s shadow.

While my dad gasped in wonder at the totally eclipsed sun on that memorable winter day in 1925, another important person in my life, Warren Fillmore, was gazing intently at the same cosmic spectacle from the roof of the Massachusetts Mutual Life Insurance building in Springfield.  Fillmore went on to become an award-winning telescope maker who helped build the Science Museum’s giant rooftop telescope, and he served as the Science Museum’s assistant director during the 1970s.

A total eclipse swept over Africa in 1973 that was hailed as the “Eclipse of the Century” because the sun was completely covered by the moon for a whopping seven minutes, a span of totality that won’t be repeated until the year 2150.   By comparison, the total phase for August’s eclipse will span less than three minutes.  As the 1973 total eclipse drew near, Fillmore decided to organize an expedition to the path of the moon’s shadow, which crossed the Kaisut Desert of northern Kenya.

The “Springfield Science Museum Solar Eclipse Expedition” included several dozen astronomy enthusiasts from across the country.  I had been working as a planetarium educator at the Science Museum for three years and had just graduated from West Springfield High School when Warren Fillmore invited me to join his group.  I would share with him the same profoundly moving celestial experience that he had unknowingly shared with my father 48 years earlier. 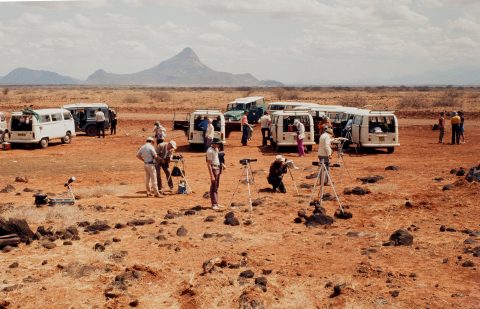 (Observing site) From their vantage point in the Kaisut Desert of northern Kenya, members of the Springfield Science Museum Solar Eclipse Expedition set up cameras and prepare to observe the total eclipse of June 30, 1973.

We spent two weeks visiting national parks and observing the amazing animals of Kenya and Tanzania.  As our group motored northward into the Kaisut Desert toward the path of totality, we saw encampments of astronomers from all over the world.  Later that day, our hearts pounded with excitement as we gazed through solar filters and spotted the moon beginning its slow passage over the sun.  Cloudy weather can ruin an eclipse experience, but on this day the weather was perfect.  After a while, the solar disc had been reduced to a thin sliver and as the last traces of the sun’s surface vanished behind the moon, the light of day evaporated along with it.  For almost seven minutes, the moon’s black silhouette was surrounded by the ghostly streamers of the sun’s corona, which glows about as bright as a full moon.  The corona reminded me of petals on a flower.  For me, the most moving part of the experience was the “forbidden” view of stars twinkling in the daytime sky.  The stunning, dreamlike quality of the display began to bring tears to my eyes, and I struggled to retain my composure so that I could read camera settings and soak in every bit of an experience that would help define my life.

On the afternoon of August 21 millions of people to the south of us will experience the breathtaking beauty of a total solar eclipse.  People in Massachusetts on that day will miss the dramatic darkening of a total eclipse, but should still make an effort to watch the partial eclipse.  To do so will require using special “eclipse glasses” and solar filters that are specially made for looking at the sun.  Gazing at the sun through sunglasses or makeshift filters can result in permanent eye damage.  Experienced stargazers from the Science Museum and Springfield Stars Club will have properly filtered instruments available for safe public viewing of the event from the Quadrangle in downtown Springfield.  The eclipse will run from 1:25pm to 3:58pm.