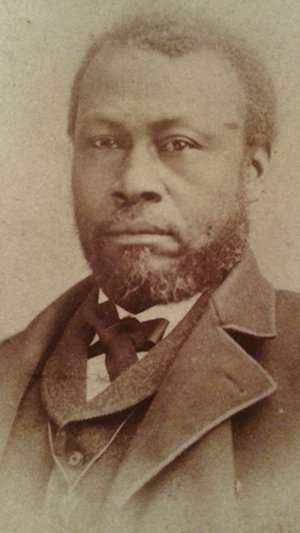 Should one of your number be arrested, you must collect together as quickly as possible, so as to outnumber your adversaries… Do not delay one moment after you are ready: you will lose all your resolution if you do. Let the first blow be the signal for all to engage; and when engaged, do not do your work by halves, but make clean work of your enemies…[1]

These stark warnings were among John Brown’s “Words of Advice” that began the document that became the organizing principles of the Springfield Branch of the U.S. League of Gileadites. At a meeting on January 15, 1851, the white abolitionist gathered with members of Springfield’s black community and together they organized a quasi-militia to resist the Fugitive Slave Act of 1850 by whatever means necessary. The Gileadites took their name from the Biblical Mount Gilead, where Gideon led the Israelites to freedom.

John Brown helped draft the organizing principles of the League of Gileadites.

Much has been written about Brown, but almost no attention has been paid to the courageous African-Americans who comprised the Gileadites and risked their lives to protect members of their community. In a paper set to be published in the Historical Journal of Massachusetts, I explore information about the many individuals who comprised the Gileadites, information I have gathered thanks to archives, libraries, and other collections that preserve ephemera. Without these resources we would not know this incredible history. And while my investigation ends with men such as Thomas Thomas, William Green, and John N. Howard, it starts with John Brown and the remarkable document he helped craft.

Beginning with his “Words of Advice,” Brown put on paper his thoughts about how the Gileadites should function.[2] Urging discretion but also swift and violent action in order to protect African Americans from slavers, Brown listed the names of twenty-seven people—not signed, but written in the hand of Brown—and the cryptic note “and seventeen others,” making a total of forty-four people who agreed to become members of the League of Gileadites.

Thomas Thomas was an abolitionist and entrepreneur and one of the League of Gileadites.

This is an amazing document. Think of it. A group of African-Americans, many of whom had been recently enslaved, organizing an illegal, armed network for mutual defense. This was a very bold and risky action in the North, but it was a Southerner’s worst nightmare. In putting their names on this document—secret though it was—these people were risking their lives.

One of the most astonishing things about the League of Gileadites is that there was a document. Apparently, its first appearance in print was in a New York newspaper called The Independent in March of 1870.[3] The author of the article, William Wells Brown, had himself escaped from slavery before the Civil War. In the article, Wells Brown gave the text of the original document. That document was also published by Franklin B. Sanborn, first in an article in The Nation called, “John Brown in Massachusetts,” and later, in a slightly edited form, in his book, The Life and Letters of John Brown.[4] Today, the whereabouts of the original document, if it even exists, is unknown.

So, who were these courageous people? In attempting to research each of the twenty-seven names on the document, the task is made difficult by uncertainties surrounding their identities. They were, after all, fugitives and many did not stay in Springfield long. So, in some instances the “best guess” was made. Even with that caveat, there is much to be learned about these brave but largely forgotten people who together built a strong and active network of resistance and support here in Springfield. Their legacy was the oft-cited statement that “no fugitive slave was ever afterward disturbed at Springfield.”

To learn more about this rich history, please look for  Who Were the Gileadites? By Cliff McCarthy forthcoming in the Historical Journal of Massachusetts.

Cliff McCarthy is Archivist for the Springfield Museums Library and Archives.