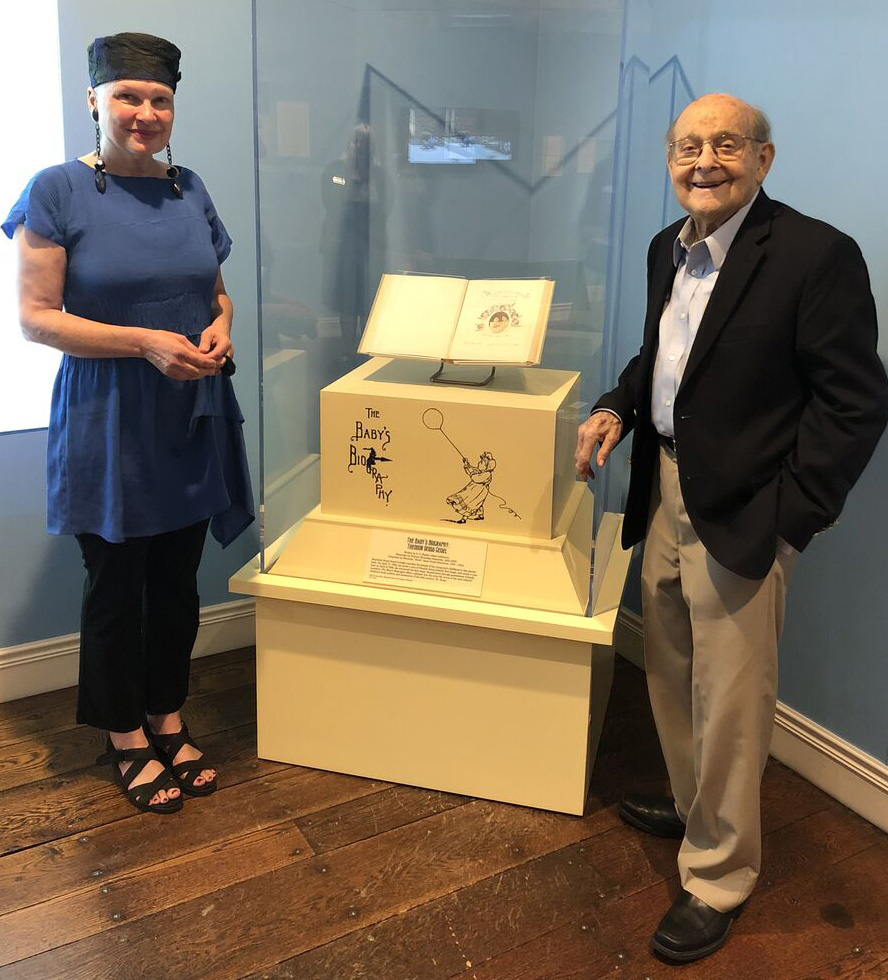 “I love coming here and especially this visit. Beautiful things are happening here in Springfield.”

Leagrey Dimond, stepdaughter of Ted Geisel, aka Dr. Seuss, traveled to Springfield May 9th to celebrate “a true testament to Mother Love.” 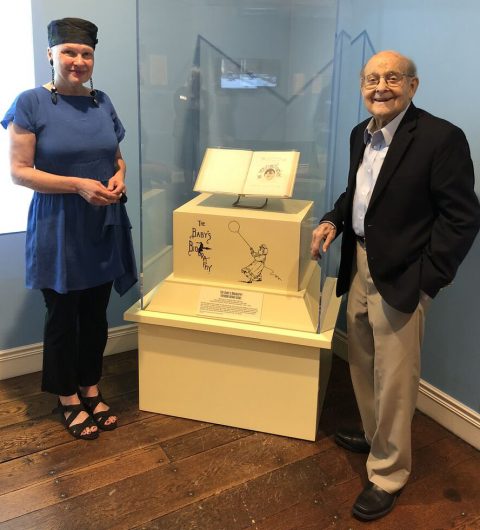 Dimond was referring to the baby book kept by Ted’s mom, Henrietta Seuss Geisel. Baby books, of course, are those wonderful treasuries of the mundane/marvelous antics of infants that parents fill out as their children grow up. The illustrated books came into vogue in the early 1900s and Dr. Seuss’s family was an early adopter of the practice of recording their children’s milestones.

Thanks to the generosity of Ted Geisel’s step daughters—Lark Grey Dimond-Cates and Leagrey Dimond—the Springfield Museums now hold Dr. Seuss’s baby book as part of its collections. Dimond was on hand for a press conference to open the exhibit The Baby’s Biography: Theodor Seuss Geisel at the Amazing World of Dr. Seuss Museum where she shared the floor with David Starr, who helped to bring the Dr. Seuss National Memorial Sculpture Garden to the Springfield Museums.

Leagrey Dimond opened the exhibit saying, “The gang here at the Springfield Museums knows how I feel about this Museum. Since I was here a year ago my thoughts have been on this museum and all that it offers to those who love Dr. Seuss.” She pointed to the baby book displayed beautifully in the gallery. “I remember calling Kay [Simpson, President of the Springfield Museums] and telling her—‘Lark found something that is absolutely amazing!’” Dimond said that in addition to witnessing a “true testament of Mother Love,” families in Springfield can  come in and see if they can find their names mentioned in this many social gatherings Nettie recorded.

David Starr next addressed the audience saying that he met Ted Geisel when the author was 80 years old, so he didn’t know him as long as Leagrey did, but upon meeting the Springfield native the two men found so many connections with each other that their friendship was fast and strong. Starr suggested a bronze sculpture garden to Geisel, who initially dismissed the idea. But Starr was persistent and Geisel finally said: “OK, Dave, you can have your kettle of bronze!”

It was the sculpture garden created by Geisel’s older step-daughter Lark Grey Dimond-Cates that eventually led to the Springfield Museums opening the Amazing World of Dr. Seuss Museum. And that museum plan prompted the sisters to donate the many personal and family items from Ted Geisel’s home, studio, and childhood to the Museums. “It is the family treasures,” Starr said, “that make this museum THE place to go in all the world!”

Dimond expressed her pleasure in working with the Museums staff and being able to create the galleries that give visitors a glimpse of the personal life of Dr. Seuss.

“I was worried about what to do with all of Ted’s things, how to best honor them,” Dimond said. “They are exactly where they should be, in Ted’s hometown of Springfield and in this remarkable museum where they will be cared for and Dr. Seuss’s fans can see them.”

On Thursday, Dimond walked together with MGM Springfield President Mike Manthis to view the spot where Ted Geisel was born. 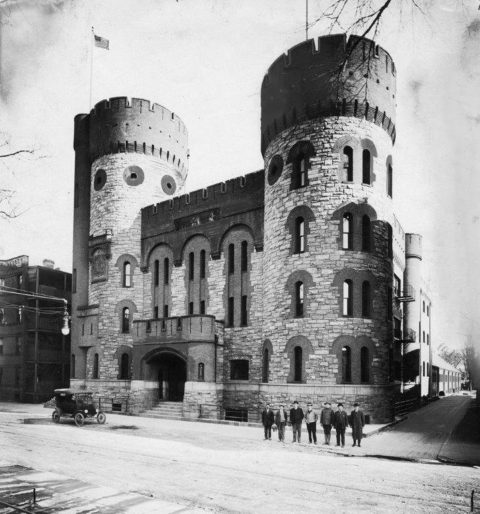 Ted Geisel was born in the home of his Seuss grandparents, across the street from the Howard Street Armory.

At the turn of the 20th century, few mothers left their homes to give birth and Henrietta Seuss Geisel delivered her second child, Theodor Seuss Geisel, in the home of her parents across the street from the Howard Street Armory. The site is now within a courtyard of the resort which is set to open August 24.

Later that morning, Dimond visited Patrick Sullivan, Superintendent of Parks in Springfield, to explore the many impacts Forest Park had on young Ted Geisel.

In 1909, Ted’s father was appointed to serve on the Springfield park board. He held this honorary position until two decades later when he became Superintendent of Parks. When Ted was young, his father took frequent trips to the park and its zoo, often bringing his son with him on Sundays and holidays for behind-the-scenes tours. Young Ted brought along a pencil and sketch pad to draw the animals, and he enjoyed combining their features to create strange new creatures. This may account for the incredible variety of animals later depicted in the books by Dr. Seuss.

Dimond said, “If I lived here, I would spend every day at Forest Park. Right away when I saw this beautiful park I recognized the softness and the special quality that I often see in Ted’s work.”

On Friday, Congressman Richard Neal led Dimond on a tour of the newly reopened Union Station.

Ted Geisel cited a trip on the train on his way from Springfield to NYC as the inspiration for his book The 500 Hats of Bartholomew Cubbins. As Geisel sat looking at the stranger in the seat in front of him, he wondered what would happen if he removed the stranger’s hat. “I decided he was so stuffy that he’d probably grow another one.” Bartholomew Cubbins’s problems all stemmed from a hat repeatedly growing out of his head.

After standing derelict for decades Union Station has been brought back as a modern transit hub for inner-city and inter-city buses as well as trains. Congressman Neal was a driving force behind this revitalized transit station.

On Saturday, Dimond visited the childhood home of Dr. Seuss, 74 Fairfield Street, to meet the Forest Park neighbors and hear about future hopes for the home. 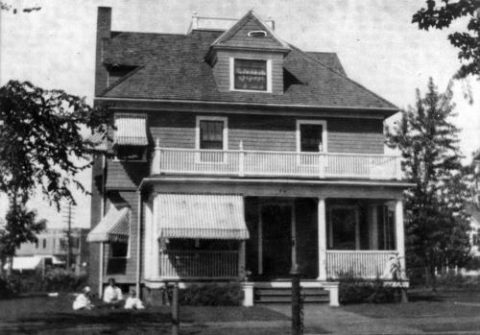 Two years after Ted was born, the growing Geisel family moved into the three story house in the Forest Park neighborhood. Ted lived there with his parents and older sister until he left Springfield to go to college. The Museums acquired the home of the Geisel family in 2016.

Surrounded by people who care about Ted Geisel’s childhood home and his legacy in Springfield, Dimond said: “It’s all happening here in Springfield! This is such a remarkable time with so much positive energy and growth. I am so happy for all of you and for Ted. I look forward to my next visit!”

Special thanks to Lark Grey Dimond-Cates and Leagrey Dimond, Ted Geisel’s stepdaughters, for the gift of the Seuss Baby Book, which gives us all a glimpse into the private life and loving family of Theodor Seuss Geisel, who grew up to be Dr. Seuss.

A Year at the Springfield Museums